Object of the Game

This game is based on the classic game known as “Battleship” .

The object of the game is to sink your opponent's fleet before he sinks yours. This is a multiplayer game, which means that you are playing against your opponent in real-time.

“All Aboard!”- Positioning your fleet:

Before sending your opponent's fleet to the bottom of the sea, you will need to strategically arrange your own ships. 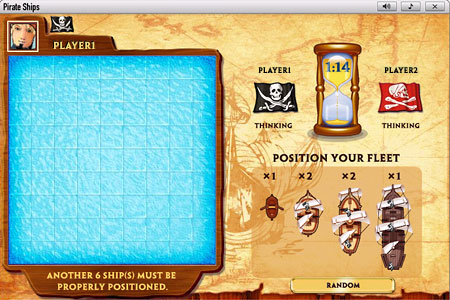 On the left-hand side of the page, you will find your board. Your ships are on the right-hand side. The easiest way to position all your ships is to click on the button that says “Random” . The game will then automatically position your ships, but you can still make further improvements if you wish.

Hint: It may be to your advantage to be fast while positioning your ships because the first player to press the “Done” button will fire the first shots.

You can position the ships by clicking and dragging them while holding down the mouse button.

You can rotate the ships either by pressing the arrow keys on your keyboard or by clicking on the arrow button in the middle of the ship.

When you activate (select) a ship on the board, it will display whether its current position is valid ( outlined in green ) or not ( outlined in red ) because it is too close to another ship.

The only rule you must follow when positioning your ships is that there must be at least one empty field between ships. 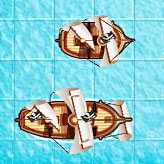 When positioning your ships, please note that there are two of some of the ships. Be sure to position both of them.
You can only click the “Done” button once all ships have been positioned correctly. After doing so, the positions are locked into place. At the top, right-hand side of the board you can view your opponent's status: “Thinking” or “Done”.

Important! You have 90 seconds to position your ships at the beginning of each game. If your ships are not positioned correctly at the end of these 90 seconds, then the computer will randomly position all of them for you, even the ones that are correctly positioned. The game will then begin.

The first player to finish setting up his ships begins.

When it's your turn (you will hear a sound, your avatar will blink, the hourglass will begin to drain), select a field from the right side of the board (at the beginning of the game it will be empty) and press the mouse button. When you do so, a cannonball is fired.

You have 15 seconds to fire each shot. If you do not fire a shot within 15 seconds you will lose your turn.

If the field you shoot is only water, then it will fill with a ring of foam.

When you hit a ship, the field will turn into a pirate flag.

Once you sink a ship, the type of ship will be shown. At the top, right-hand side you can see which of your opponent's ships must still be sunk. 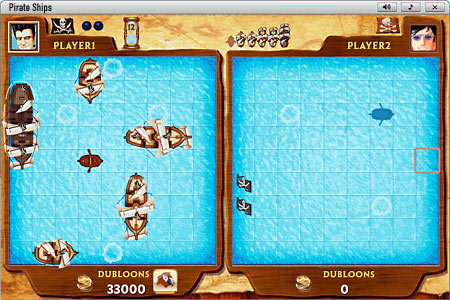 Each player plays until he misses twice. After the second miss, it is the next player's turn.

“Pirates ahead!”- Spying with the Parrot:

One special feature is the ability to “spy out” your opponent's ships. To do this, click the parrot (when it's your turn) at the bottom edge of the board. Now move your mouse to the opponent's board. When you do so, five fields will be lit-up. Select the area you would like to view and activate the parrot by clicking the mouse button. When you do so, you will be able to see if one or more ships are present on any of the five fields you've uncovered.

You can only spy on your opponent once per game. The use of the parrot counts as a miss, which means that your turn will end after using the parrot if you have already fired a cannon and missed.

“Give us yer dubloons!”- Scoring details:

Series Bonus: You will receive an extra bonus each time you hit your opponent's ship in a row in addition to the normal dubloons you receive for the hit:

After the 5th hit in a row each additional hit will give you 2,500 dubloons. Sunken Ship Bonus: You will receive an extra bonus (in addition to the other rewards) for each sunken ship. This value of the bonus depends on the size of the ship:

Winner Bonus: Once you have sunk all of your opponent's ships, you will receive a bonus of 25,000 dubloons

plus an extra bonus for each of your ships that have not yet been sunk:

...and now out of the berths and into the battle!