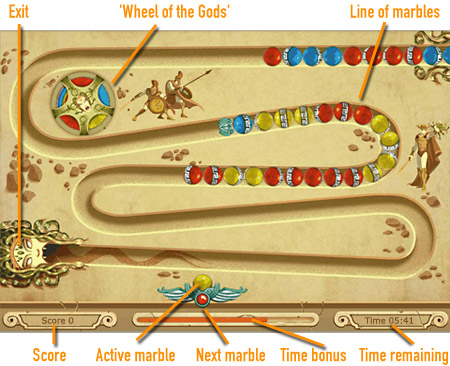 Zeus, the king of the ancient Greek gods, challenges you to a thrilling duel. He will pit you against a different mythological figure for each of the four elements. In order to progress, you will need speed, skill and strategy. The marbles of fate roll continuously towards the exit. Your aim is to clear the lines of marbles before they reach the exit. Two or more marbles of the same colour next to each other can be cleared by shooting a marble of the same colour next to them.

Zeus is aware of man's imperfections and shows mercy by offering him the "Wheel of the Gods" and other extras which can be collected. This allows the possibility to influence the result of this uneven battle.

The aim of the game

You control the marble catapult, at the bottom of the screen, with your mouse. You fire a marble by clicking the mouse. This marble will travel upwards until it makes contact with other marbles.

A cascade is also known as a chain-reaction which is cleared with just one shot and continues on its own. In order to activate a cascade, you have to clear a line of marbles which has like-coloured marbles at either side. If the line of marbles in the middle is cleared, a new line of marbles forms and is also cleared. The more steps to the cascade, the more points are scored.
In the image displayed two cascades can be made by either clearing the two blue marbles at the right-hand side between the red marbles or by clearing the three blue marbles at the left-hand side between the yellow marbles.

The Wheel of the Gods

The Wheel of the Gods can be found in a different position in each level. The wheel has five different coloured chambers. Your task is to fill the wheel by shooting the correct marble into the chamber which is currently facing downwards. You can shoot whichever colour you like into a rainbow-coloured chamber.

The sooner you fill the chambers of the wheel, the quicker you can reach the next level.
Once the 'Wheel of the Gods' is full, Zeus stops sending lines of marbles as long as the minimum amount of lines for the particular level has been cleared. As soon as you clear the last marble, you reach the next level.

However, even if you don't fill the wheel with marbles, you can still reach the next level - you are simply faced with more marbles.

You can receive "extras" for a variety of actions. These extras are useful and are rewarded with additional points.

NB: The extras can only be used if you collect the corresponding symbol with your catapult when it falls.

The extras consist of:

The lines of marbles move slower for a few seconds.

The lines of marbles stop completely for a few seconds.

The lines of marbles move backwards for a few seconds.

The rainbow-ball stands for each colour. You can therefore clear two groups at the same time.

With the bomb you clear all marbles around the point where the marble hits.

With the paint brush, you paint all marbles within an area in just one colour. Clearing large lines gives you extra points.

With the bolt of lightning you can clear all marbles directly vertical of the catapult.

The colour-bomb clears all marbles of a particular colour from the screen.

The extras won't always appear in the order shown above. Some extras are only available in certain levels or through particular actions.

"Marbles of Olympus" rewards a variety of actions with points and bonuses. In order to achieve high scores there are different strategies. In general, there are two strategies:

The points system has been developed based on these strategies. The following table lists the points and bonuses for each level. The order relates to the weighting of the points for the overall score.

Tips and tricks to score lots of points